Cave Hollow Press has completed the cover design, the penultimate step in publishing Show Me the Sinister Snowman. The fifth book in the series will go to press (and to digitalization) for release March 31. 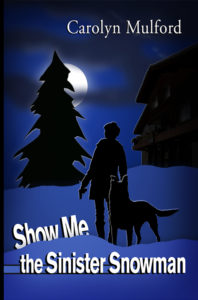 The first book, Show Me the Murder, takes place in May. Former CIA covert operative Phoenix Smith returns to her Missouri hometown to recover from being shot. Phoenix works with an old friend, Acting Sheriff Annalynn Carr Keyser, to learn the truth about her late husband’s violent death. Phoenix rescues a wounded witness, a Belgian Malinois named Achilles. A K-9 dropout, he becomes her valued sidekick. To Phoenix’s annoyance, struggling singer Connie Diamante insists on taking part in this and subsequent investigations: in June, Show Me the Deadly Deer; in August, Show Me the Gold; in September, Show Me the Ashes.

In book 5, it’s the week before Thanksgiving. Annalynn has completed her term as sheriff and is campaigning to replace a congressman who died in an “accident.” Phoenix, a certified capitalist, is stuck running the foundation she established to give Annalynn a job. The ex-spy is bored until a woman hiding from an abusive husband begs the foundation to protect her.

Phoenix and friends accompany Annalynn to a political gathering in an isolated antebellum mansion. A blizzard traps them there with a machete-wielding man lurking outside and an unidentified killer inside.

Covid-19 stopped printers cold last spring. Consequently, the mass market paperback edition of Show Me the Sinister Snowman missed its slot in the printing queue. With the snow gone (until next winter, I hope), Harlequin Worldwide Mystery has just released the fifth book in the Show Me series.     This one finds Phoenix and friends trapped in an isolated mansion by a blizzard. Their housemates are aspiring political candidates and potential donors, one of whom intends to lessen their number before the roads clear. Phoenix has come to the meeting with two goals: to support Annalynn’s electoral dreams and … END_OF_DOCUMENT_TOKEN_TO_BE_REPLACED

When I began writing The Feedsack Dress almost 50 years ago, I asked my mother and two sisters to talk about their memories of 1949. I’d chosen that year for the novel because my recollections and my research identified it as a time of transition for the country, our rural Missouri community, and our family. Our discussion evoked many forgotten details and produced a major plot point. We gathered around the kitchen table at my parents’ farm on a hot summer day. To my surprise, each of us remembered not only different movies and music but also different versions of events, … END_OF_DOCUMENT_TOKEN_TO_BE_REPLACED

2020 has been a horrible year. I hope it doesn’t end like another bad year, 1811. That year, rains brought mud and flood to Upper Louisiana. The nightly appearance of the devil-tailed Great Comet prompted rumors of destruction. The brilliant Tecumseh campaigned for tribes on both sides of the Mississippi to unite to beat back the encroaching Americans. The adolescent United States crept closer to the War of 1812. Then a natural disaster struck the middle of the newly expanded United States. In early morning on December 16, a series of earthquakes, aftershocks, and tremors began, interrupting New Madrid’s French … END_OF_DOCUMENT_TOKEN_TO_BE_REPLACED

Air conditioning keeps me comfortable during the current heat wave, but I remember how we tried to cool off when nothing but the movie theater was air conditioned. July and August approximated hell when I was a kid. No day was so hot that we wouldn’t work in the fields and the garden. Only the persistent breeze made the heat and humidity bearable. The steamy days heated the house, making it equally miserable. When we got electricity, fans helped a little. During the day the coolest place to be was in the shade of a big elm. (Sadly Dutch elm … END_OF_DOCUMENT_TOKEN_TO_BE_REPLACED

When I started writing The Feedsack Dress, my own memories of farm life and the ninth grade guided the plot, but I needed facts about life in 1949. I looked for them in the same places I would have if I were writing an article. At the library I wore out my eyes scrolling through microfilm copies of the Kirksville Daily Express and two great photo magazines, Life and Look. These answered such questions as the styles of dresses or skirts and blouses a fashionable ninth grader wore to school and how much they cost. Few girls wore jeans or … END_OF_DOCUMENT_TOKEN_TO_BE_REPLACED