Ordering Information
Historical Background
Preparing for the Next One
Chapter 1: The Message
Suggestions for Students
– Questions to Consider
– Topics to Explore
Discussion Topics for Book Groups
If you want to know more …
Blog: People, Place, Period, Potpourri 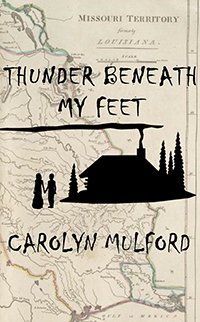 Shy, sensible Betsy, 15, takes charge of the family farm and her brother Johnnie, 10, when their mother rides south to bring her sick husband home to New Madrid, Missouri Territory. Four days later, December 16, 1811, powerful earthquakes destroy homes and trees, flood and poison the land, and turn the Mississippi into a river of death. Their neighbors flee the never-ending quakes. Betsy stays to wait for her parents, care for the animals, and find the family’s stolen money. She and Johnnie share a lean-to with four strangers—a 16-year-old French-Shawnee boy, a mute slave woman, a poor French tutor, and his elegant Spanish wife. Their secrets hold them there as the quakes and the cold endanger their lives.

This book is currently out of print, but I have a few copies for sale. If you want to order the book, Contact me.

A series of the country’s most powerful earthquakes and aftershocks began December 16, 1811, near New Madrid, Upper Louisiana/Missouri Territory. The quakes terrified residents living where Missouri, Arkansas, Kentucky, and Tennessee now come together. Many feared the world was ending. Almost everyone living east of the Mississippi River felt the major quakes. The first one woke President James Madison in the White House and rang church bells in cities along the Atlantic coast.

In the next few months, quakes killed an estimated 1,500 people on the sparsely populated frontier, destroyed or severely damaged most homes within 100 miles of the epicenter, toppled chimneys more than 200 miles away, drained and formed lakes, and briefly reversed the Mississippi River’s flow.

The majority of the approximately 1,200 people living in and near the town of New Madrid fled and resettled elsewhere. One of the few families that stayed “lived under boards” for eighteen months before rebuilding a house.

Used for temporary camps by French hunters, settled under the Spanish, and purchased by the United States in 1803, the Mississippi River port served as a center for traders, farmers, and travelers. In the streets, people spoke English, French, Spanish, and a smattering of other European and Native American languages. Before the earthquakes, the residents hoped New Madrid would become an important commercial center like St. Louis, some 200 miles to the north.

The quakes in the winter of 1811-1812 and spring floods destroyed the carefully laid-out town. The Mississippi River changed its course, placing the original site in the river or even in Kentucky. The small remaining population rebuilt New Madrid, but the dream of a bustling river port died.

Tremors persist today, as do threats of catastrophic earthquakes. Some scientists say such major earthquakes occur about once every 500 years in the New Madrid Seismic Zone. Some say the cycle may be closer to 200 years.

Missouri and surrounding states conduct disaster drills that include practice in responding to earthquakes.

What geologists say: For a summary of the current thinking (it keeps changing) on the New Madrid earthquakes of 1811-1812 and on future seismic activity, visit http://earthquake.usgs.gov/earthquakes/states/events/1811-1812.php

Preparing for the Next Big Ones

Today earthquakes as powerful as those in 1811-1812 (approximately 7.5 to 8.5 on the Richter scale) would affect millions of people. Major cities likely to suffer serious damage include Memphis, Tennessee; Louisville, Kentucky; and St. Louis, Missouri. In recent years nine states have held annual earthquake disaster drills.

The Missouri government offers an opportunity to experience a virtual earthquake at http://sema.dps.mo.gov/earthquake_preparedness/EQ_MM/

The instructions include: “Buy a large garbage can to store bottled drinking water, canned and dried non-perishable food that does not need to be cooked (tuna and crackers, for example), a can opener, flashlights, first aid supplies, battery powered radio, seasonal clothing and blankets. It may also become your “go kit’ if you need to leave your home.”

Immediately after an earthquake, “Do not flush toilets until you know sewage lines are intact. Open cabinets cautiously because objects may fall off shelves.”

Check websites in your area for similar instructions.

If you want to know more …

If you hunger for more details about the 1811-1812 earthquakes, explore such books as The New Madrid Earthquakes, by James L. Penick, Jr. (University of Missouri Press, 1981), and The Earthquake America Forgot: 2,000 Temblors in Five Months—And It Will Happen Again, by David Stewart and Ray Knox (Gutenberg-Richter, 1995).

The most difficult but enjoyable parts of my research concerned daily life for the people from the American, Spanish, French, and Native American cultures living side by side in New Madrid. I wondered what songs they sang and stories they told. You can listen to songs Betsy and her friends knew at http://www.pdmusic.org/1800s.html. Among the books I particularly liked were Catfish, Fiddles, Mules, and More: Missouri’s State Symbols, by John C. Fisher (University of Missouri Press, 2003), It’s Good to Tell You: French Folktales from Missouri, by Rosemary Hyde Thomas (University of Missouri Press, 1981), and Country Folk Medicine: Tales of Skunk Oil, Sassafras Tea, and Other Old-Time Remedies, by Elizabeth Janos (Globe Pequot, 1990).

For me, the most entertaining way to find out about life on the frontier is to visit historic sites and museums, especially living history farms and communities. New Madrid today doesn’t resemble Betsy’s village (and isn’t on the same spot), but the New Madrid Historical Museum outlines the town’s history. In Ste. Genevieve, Isabella and Alexandre’s home, you can see a 1792 French house built with the logs standing upright and other remnants of French culture. Interested in the lakes that the earthquakes created? Visit Reelfoot Lake State Park in northwest Tennessee.

If you’re curious about how Americans farmed in the years before and after the earthquakes, visit such places as the Virginia plantations of George Washington (Mount Vernon) and Thomas Jefferson (Monticello) and the much more modest Lincoln Boyhood National Memorial in southern Indiana.

New Madrid began as a stopover for hunters and traders like Rabbit’s father and uncles. Museums and exhibits along the route of the Lewis and Clark Expedition display keel boats, canoes, weapons, and tools they and frontier families like Betsy’s owned.

You can discover the answers to most of your questions on your own. Local libraries contain many books and movies, both fiction and nonfiction, that portray life on the frontier. Explore the shelves to get an overview. If you want to know isolated facts, you may find them on such search engines as Google.

The fiftieth anniversary of Title IX, a landmark law requiring gender equality in schools receiving federal funds, reminded me of how little opportunity to play sports most females of my generation had. (Title IX changed much more than sports, but that’s another story.) In my one-room school with roughly a dozen students in grades one through eight, we had no organized physical education program for girls or boys. We played together at recess and noon, mostly baseball or games involving some form of tag. Our entire sporting equipment consisted of two bats, a softball, a baseball, and a volleyball (used for … END_OF_DOCUMENT_TOKEN_TO_BE_REPLACED

Memories interrupted my enjoyment of the Vienna Philharmonic’s New Year’s concert broadcast last night on PBS. Unlike my Show Me protagonist, a CIA covert operative embedded in Vienna, I lived there only three years, but we shared a love of the city’s music. I went to the opera, an orchestra concert, chamber music, an operetta, or some other musical performance once or twice a week. Tickets were cheap, particularly if you were willing to sit in the balcony directly above a chamber orchestra using the instruments in vogue when the music was composed centuries ago. You could usually get a … END_OF_DOCUMENT_TOKEN_TO_BE_REPLACED

Covid-19 stopped printers cold last spring. Consequently, the mass market paperback edition of Show Me the Sinister Snowman missed its slot in the printing queue. With the snow gone (until next winter, I hope), Harlequin Worldwide Mystery has just released the fifth book in the Show Me series.     This one finds Phoenix and friends trapped in an isolated mansion by a blizzard. Their housemates are aspiring political candidates and potential donors, one of whom intends to lessen their number before the roads clear. Phoenix has come to the meeting with two goals: to support Annalynn’s electoral dreams and … END_OF_DOCUMENT_TOKEN_TO_BE_REPLACED

When I began writing The Feedsack Dress almost 50 years ago, I asked my mother and two sisters to talk about their memories of 1949. I’d chosen that year for the novel because my recollections and my research identified it as a time of transition for the country, our rural Missouri community, and our family. Our discussion evoked many forgotten details and produced a major plot point. We gathered around the kitchen table at my parents’ farm on a hot summer day. To my surprise, each of us remembered not only different movies and music but also different versions of events, … END_OF_DOCUMENT_TOKEN_TO_BE_REPLACED

2020 has been a horrible year. I hope it doesn’t end like another bad year, 1811. That year, rains brought mud and flood to Upper Louisiana. The nightly appearance of the devil-tailed Great Comet prompted rumors of destruction. The brilliant Tecumseh campaigned for tribes on both sides of the Mississippi to unite to beat back the encroaching Americans. The adolescent United States crept closer to the War of 1812. Then a natural disaster struck the middle of the newly expanded United States. In early morning on December 16, a series of earthquakes, aftershocks, and tremors began, interrupting New Madrid’s French … END_OF_DOCUMENT_TOKEN_TO_BE_REPLACED