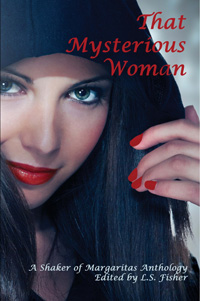 Experience has taught Jessica to keep secret her ability to see character-revealing auras. When an inexplicable cloud over a murder victim’s grave leads her to a killer, her unusual perceptions pose a dilemma and place her in danger.

“An Aura of Death” is one of 27 diverse stories by writers from more than a dozen states, including Alabama, Colorado, California, Georgia, Massachusetts, Montana, Missouri, and Virginia. That Mysterious Woman is the fourth in an award-winning anthology series. 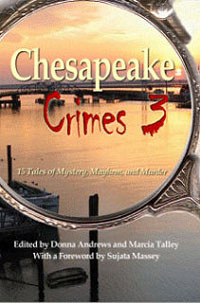 Everything frightens Lucille. As her children grew up, she hid all her fears—except driving across the four-mile-long Chesapeake Bay Bridge. When she goes on a police ride-along to see why her daughter became a cop, Lucille’s fear could be fatal.

This short story appears in an anthology of “15 Tales of Mystery, Mayhem, and Murder” set around the Chesapeake Bay. 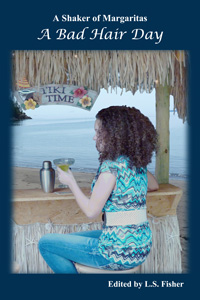 Dumped on Facebook, a humiliated wife donates her husband’s abandoned treasures to a thrift store.

“Leftovers” is one of 24 humorous stories featuring a trying but triumphant day for women in their prime. Most stories take place in the Midwest, but writers from coast to coast contributed to the anthology, the third in an award-winning series.

Memories interrupted my enjoyment of the Vienna Philharmonic’s New Year’s concert broadcast last night on PBS. Unlike my Show Me protagonist, a CIA covert operative embedded in Vienna, I lived there only three years, but we shared a love of the city’s music. I went to the opera, an orchestra concert, chamber music, an operetta, or some other musical performance once or twice a week. Tickets were cheap, particularly if you were willing to sit in the balcony directly above a chamber orchestra using the instruments in vogue when the music was composed centuries ago. You could usually get a … END_OF_DOCUMENT_TOKEN_TO_BE_REPLACED

Covid-19 stopped printers cold last spring. Consequently, the mass market paperback edition of Show Me the Sinister Snowman missed its slot in the printing queue. With the snow gone (until next winter, I hope), Harlequin Worldwide Mystery has just released the fifth book in the Show Me series.     This one finds Phoenix and friends trapped in an isolated mansion by a blizzard. Their housemates are aspiring political candidates and potential donors, one of whom intends to lessen their number before the roads clear. Phoenix has come to the meeting with two goals: to support Annalynn’s electoral dreams and … END_OF_DOCUMENT_TOKEN_TO_BE_REPLACED

When I began writing The Feedsack Dress almost 50 years ago, I asked my mother and two sisters to talk about their memories of 1949. I’d chosen that year for the novel because my recollections and my research identified it as a time of transition for the country, our rural Missouri community, and our family. Our discussion evoked many forgotten details and produced a major plot point. We gathered around the kitchen table at my parents’ farm on a hot summer day. To my surprise, each of us remembered not only different movies and music but also different versions of events, … END_OF_DOCUMENT_TOKEN_TO_BE_REPLACED

2020 has been a horrible year. I hope it doesn’t end like another bad year, 1811. That year, rains brought mud and flood to Upper Louisiana. The nightly appearance of the devil-tailed Great Comet prompted rumors of destruction. The brilliant Tecumseh campaigned for tribes on both sides of the Mississippi to unite to beat back the encroaching Americans. The adolescent United States crept closer to the War of 1812. Then a natural disaster struck the middle of the newly expanded United States. In early morning on December 16, a series of earthquakes, aftershocks, and tremors began, interrupting New Madrid’s French … END_OF_DOCUMENT_TOKEN_TO_BE_REPLACED

Air conditioning keeps me comfortable during the current heat wave, but I remember how we tried to cool off when nothing but the movie theater was air conditioned. July and August approximated hell when I was a kid. No day was so hot that we wouldn’t work in the fields and the garden. Only the persistent breeze made the heat and humidity bearable. The steamy days heated the house, making it equally miserable. When we got electricity, fans helped a little. During the day the coolest place to be was in the shade of a big elm. (Sadly Dutch elm … END_OF_DOCUMENT_TOKEN_TO_BE_REPLACED