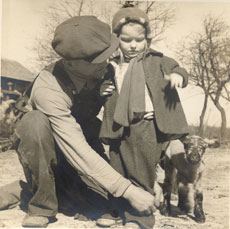 My father, me almost three, and the lamb who followed me everywhere

I grew up on a farm near Kirksville, Missouri, the fictionalized setting of my first middle grade/young adult novel, The Feedsack Dress. Like its main character, I attended a one-room school. During the summer I worked in the fields and garden, pumped water for the milk cows, suffered through 4-H sewing projects, and read books that carried me far away.

As soon as I Iearned to read, I wanted to create my own stories. Growing up, I realized many more people make a living writing nonfiction than fiction. I liked editing the Kirksville Senior High and Northeast Missouri State Teachers College (now Truman State) newspapers so much that I went on to a Master’s in journalism at the University of Missouri.

Longing for adventure and an opportunity to do something worthwhile, I joined the year-old Peace Corps. As a Volunteer in Dessie, Ethiopia, I taught English in the province’s only high school and helped build a school at a leprosarium. The experience taught me the value of my American heritage (despite ideals not reached), deepened my curiosity about and appreciation for other cultures, and established lifelong friendships. Coming home after two years, I expanded my world by traveling for six months in the Middle East and Europe. 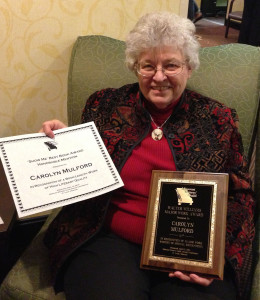 My first editorial job, at the NEA Journal in Washington, D.C., taught me invaluable lessons about writing, editing, and planning. But I wanted to go abroad again. I joined the new United Nations Industrial Development Organization in Vienna, Austria. Here I watched colleagues from some sixty countries collaborate and enjoyed wonderful music, scenery, and friendships. The bureaucratic language and stiff technical editing, however, were damaging my writing. I quit. I returned to the States the long, slow way, through Asia and Australia.

Settling in Washington, D.C., I edited a national magazine on service-learning and, in 1982, became a freelance writer and editor. I wrote hundreds of articles (dozens on travel), four nonfiction books, and a variety of other nonfiction materials. I edited everything from calendars to conference proceedings. One specialty became national newsletters, most notably Writing That Works, a monthly “desktop seminar” for corporate writers and editors.

I revived my childhood dreams of writing fiction. In 2007 I moved back to Columbia, Missouri, to focus on historical novels for tweens and teens and contemporary mysteries for  adults. The Missouri Center for the Book named The Feedsack Dress the state’s Great Read at the 2009 National Book Festival.

Between the mysteries, I used my nonfiction skills to research the 1811-1812 New Madrid earthquakes and my fiction skills to write Thunder Beneath My Feet, a story of how a teenage girl allies with strangers to cope with the ongoing destruction. The Missouri State Teachers Association selected both this book and The Feedsack Dress for its Reading Circle Program.

Currently I’m giving a final polish to a standalone featuring an unsettled Returned Peace Corps Volunteer who visits an overwhelmed friend on a struggling multigenerational farm. Any hope of a pleasant break from graduate school disappears when she finds a young Amish neighbor dead in the front pasture.

I’m also marketing a revised manuscript of a mystery series in which a freelance crime reporter and her mother, a storyteller, endanger their lives to reveal the stories behind murders.

Other projects include writing an occasional short story and, if feasible, republishing my out-of-print books as e-books.

Writing is just one part (and the best part) of a writer’s work.

The fiftieth anniversary of Title IX, a landmark law requiring gender equality in schools receiving federal funds, reminded me of how little opportunity to play sports most females of my generation had. (Title IX changed much more than sports, but that’s another story.) In my one-room school with roughly a dozen students in grades one through eight, we had no organized physical education program for girls or boys. We played together at recess and noon, mostly baseball or games involving some form of tag. Our entire sporting equipment consisted of two bats, a softball, a baseball, and a volleyball (used for … END_OF_DOCUMENT_TOKEN_TO_BE_REPLACED

Memories interrupted my enjoyment of the Vienna Philharmonic’s New Year’s concert broadcast last night on PBS. Unlike my Show Me protagonist, a CIA covert operative embedded in Vienna, I lived there only three years, but we shared a love of the city’s music. I went to the opera, an orchestra concert, chamber music, an operetta, or some other musical performance once or twice a week. Tickets were cheap, particularly if you were willing to sit in the balcony directly above a chamber orchestra using the instruments in vogue when the music was composed centuries ago. You could usually get a … END_OF_DOCUMENT_TOKEN_TO_BE_REPLACED

Covid-19 stopped printers cold last spring. Consequently, the mass market paperback edition of Show Me the Sinister Snowman missed its slot in the printing queue. With the snow gone (until next winter, I hope), Harlequin Worldwide Mystery has just released the fifth book in the Show Me series.     This one finds Phoenix and friends trapped in an isolated mansion by a blizzard. Their housemates are aspiring political candidates and potential donors, one of whom intends to lessen their number before the roads clear. Phoenix has come to the meeting with two goals: to support Annalynn’s electoral dreams and … END_OF_DOCUMENT_TOKEN_TO_BE_REPLACED

When I began writing The Feedsack Dress almost 50 years ago, I asked my mother and two sisters to talk about their memories of 1949. I’d chosen that year for the novel because my recollections and my research identified it as a time of transition for the country, our rural Missouri community, and our family. Our discussion evoked many forgotten details and produced a major plot point. We gathered around the kitchen table at my parents’ farm on a hot summer day. To my surprise, each of us remembered not only different movies and music but also different versions of events, … END_OF_DOCUMENT_TOKEN_TO_BE_REPLACED

2020 has been a horrible year. I hope it doesn’t end like another bad year, 1811. That year, rains brought mud and flood to Upper Louisiana. The nightly appearance of the devil-tailed Great Comet prompted rumors of destruction. The brilliant Tecumseh campaigned for tribes on both sides of the Mississippi to unite to beat back the encroaching Americans. The adolescent United States crept closer to the War of 1812. Then a natural disaster struck the middle of the newly expanded United States. In early morning on December 16, a series of earthquakes, aftershocks, and tremors began, interrupting New Madrid’s French … END_OF_DOCUMENT_TOKEN_TO_BE_REPLACED