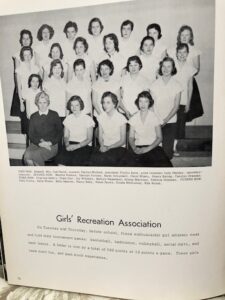 The fiftieth anniversary of Title IX, a landmark law requiring gender equality in schools receiving federal funds, reminded me of how little opportunity to play sports most females of my generation had. (Title IX changed much more than sports, but that’s another story.)

In my one-room school with roughly a dozen students in grades one through eight, we had no organized physical education program for girls or boys. We played together at recess and noon, mostly baseball or games involving some form of tag. Our entire sporting equipment consisted of two bats, a softball, a baseball, and a volleyball (used for playing handy-over, with half the school on one side of the coal shed and half on the other).

In ninth grade, as I wrote in The Feedsack Dress, the most familiar sport to country kids—and the least played in girls’ P.E. class—was softball. By the time I learned the basic skills of an exotic game like deck tennis (played much like volleyball but with a hard rubber ring), a new game popped up. I added little to my homeroom’s intramural teams.

Neither my senior high school nor college in Kirksville, Missouri, fielded girls’ teams that competed with other schools. Neither had a swimming pool, and the high school had no playing field or tennis courts for girls. High school P.E. classes met in the basement gym. There we did boring calisthenics and played deck tennis, aerial darts, badminton, volleyball, and basketball. I was surprised to learn I had lettered my senior year (rare for a girl). I did it by recruiting the school’s best players for my intramural teams. If my memory is accurate, we won all the tournaments. The only mention of girls’ sports in the high school yearbook was the page above, which shows the members of the Girls’ Recreation Association (I’m second from left on the front row).

The college’s program offered little more than the high school did, though I did learn to play table tennis and jump on a trampoline. My athletic high point: The women’s P.E. Department (two women) let me substitute a softball elective for a required calisthenics course. As a grad student at the University of Missouri, I saw no opportunity to participate in any sports. One woman among several men in the renowned journalism school aspired to be a sports writer.

Finally, during Peace Corps training at Georgetown University, I received introductions to swimming, soccer, and cross-country running. My physical education consisted of appetizers but no main course.

The real national awakening to the potential of women’s sports took place in September 1973, more than a year after Title IX, when Billie Jean King took down Bobby Riggs in the Battle of the Sexes. She changed not just tennis but the recognition of women as athletes. She has continued to push for equal pay and power on the court and off ever since.

Even with the much greater (though not equal) opportunities today, I wouldn’t have become a great—even a good—athlete, but several of my classmates could have. And school would all have been more fun.

Equal opportunity, wherever you find it, makes life less frustrating and more rewarding.

The fiftieth anniversary of Title IX, a landmark law requiring gender equality in schools receiving federal funds, reminded me of how little opportunity to play sports most females of my generation had. (Title IX changed much more than sports, but that’s another story.) In my one-room school with roughly a dozen students in grades one through eight, we had no organized physical education program for girls or boys. We played together at recess and noon, mostly baseball or games involving some form of tag. Our entire sporting equipment consisted of two bats, a softball, a baseball, and a volleyball (used for … END_OF_DOCUMENT_TOKEN_TO_BE_REPLACED

Memories interrupted my enjoyment of the Vienna Philharmonic’s New Year’s concert broadcast last night on PBS. Unlike my Show Me protagonist, a CIA covert operative embedded in Vienna, I lived there only three years, but we shared a love of the city’s music. I went to the opera, an orchestra concert, chamber music, an operetta, or some other musical performance once or twice a week. Tickets were cheap, particularly if you were willing to sit in the balcony directly above a chamber orchestra using the instruments in vogue when the music was composed centuries ago. You could usually get a … END_OF_DOCUMENT_TOKEN_TO_BE_REPLACED

Covid-19 stopped printers cold last spring. Consequently, the mass market paperback edition of Show Me the Sinister Snowman missed its slot in the printing queue. With the snow gone (until next winter, I hope), Harlequin Worldwide Mystery has just released the fifth book in the Show Me series.     This one finds Phoenix and friends trapped in an isolated mansion by a blizzard. Their housemates are aspiring political candidates and potential donors, one of whom intends to lessen their number before the roads clear. Phoenix has come to the meeting with two goals: to support Annalynn’s electoral dreams and … END_OF_DOCUMENT_TOKEN_TO_BE_REPLACED

When I began writing The Feedsack Dress almost 50 years ago, I asked my mother and two sisters to talk about their memories of 1949. I’d chosen that year for the novel because my recollections and my research identified it as a time of transition for the country, our rural Missouri community, and our family. Our discussion evoked many forgotten details and produced a major plot point. We gathered around the kitchen table at my parents’ farm on a hot summer day. To my surprise, each of us remembered not only different movies and music but also different versions of events, … END_OF_DOCUMENT_TOKEN_TO_BE_REPLACED

2020 has been a horrible year. I hope it doesn’t end like another bad year, 1811. That year, rains brought mud and flood to Upper Louisiana. The nightly appearance of the devil-tailed Great Comet prompted rumors of destruction. The brilliant Tecumseh campaigned for tribes on both sides of the Mississippi to unite to beat back the encroaching Americans. The adolescent United States crept closer to the War of 1812. Then a natural disaster struck the middle of the newly expanded United States. In early morning on December 16, a series of earthquakes, aftershocks, and tremors began, interrupting New Madrid’s French … END_OF_DOCUMENT_TOKEN_TO_BE_REPLACED