The publisher of Thunder Beneath My Feet is closing shop December 31, 2017. Both the e-book and print editions will disappear from online bookstores. In 2018, my garage will hold most of the remaining copies of my novel about the devastating New Madrid earthquakes of 1811-1812.

Many writers face this problem. Small publishers often go out of business after a few years of struggle. Big ones discontinue imprints that don’t meet sales targets. One friend’s mystery won an Agatha a couple of days after she heard her big-name publisher was abandoning the imprint. Another friend has seen three of her publishers go under. My Show Me series publisher, a small part of a huge conglomerate, announced to authors in early 2016 that only mysteries already under contract would be published. I sold the fifth book in my series, Show Me the Sinister Snowman, to another publisher and moved on to a new series.

The Thunder publisher, a small independent, notified her authors of the pending closing in November 2016 and suggested they look for another publisher or self-publish. She preferred to write and farm. Who can argue with those priorities?

My first thought was to self-publish the book. I loved writing Thunder, and readers have given it great feedback. I brainstormed for a distinctive publishing name, one short enough to fit on the spine and visual enough to suggest a logo. The company name would also need to work if I wanted to self-publish mysteries. Darned tough to come up with a winner.

Over the last ten years I’ve learned that successful publishing involves not only having a quality product but also a good marketing plan and an economically feasible way to distribute books to bookstores and libraries. Few self-publishers live by Amazon alone.

Having earned my living as a freelance writer and editor for some 35 years, I know how much time and effort the business side can take. Did I want to put writing aside to spend time (and money) on marketing and distribution?

The marketing and distribution challenges

I worried about penetrating the most obvious market, Missouri schools, something the publisher hadn’t tried to do and I hadn’t accomplished.

Many writers promote sales, and earn money, by giving programs at schools. That works well if you have several successful middle grade books. I don’t, and I’m not trying to build a career writing MG/YA books. Besides, I had no contacts.

I submitted Thunder to for possible inclusion in the Missouri State Teachers Association’s Reading Circle Program. The reviewer told me she was recommending it, but the list of approved books still hasn’t come out.

In my first efforts to sell to schools, I became a vendor at state conferences of history teachers and school librarians. The librarians particularly liked to my pitch, but they pointed out that they preferred to buy hardbacks. Paperbacks don’t last long in school libraries.

If I were going to publish a new edition, hardbacks seemed the way to go. I did some pricing. The per unit cost goes down as the number of copies go up. Small print runs would mean raising the price of the book to more than most libraries would pay.

One key problem in marketing to schools was the failure to send review copies to such essential professional publications as School Library Journal. (It has precise requirements on submission times of review copies and on national distribution.) Without favorable reviews in professional publications, librarians hesitate to buy. I doubt anyone would consider reviewing a self-published second edition.

National (and regional) distribution to bookstores and libraries constitutes a major problem for both small publishers and self-publishers. Many bookstores dislike (even refuse) to deal with Amazon or Ingram, preferring to buy through such distributors as Baker & Taylor.

Online sales, particularly of e-books, allow some self-published books to flourish, but I didn’t see that as the case for my MG/YA historical novel. Most of my sales have been print copies.

For now at least, I’ll let Thunder Beneath My Feet go out of print. If a demand develops, I can always self-publish. If a publisher with marketing savvy and distribution capabilities wants to pay me to publish a new edition, great.

Meanwhile, I have a couple of dozen copies in the garage. If you want to buy one or more, contact me.

The first earthquake threw the 150 or so residents of Little Prairie out of their beds. The ground roared, moaned, and rumbled. Strange lights flashed from the earth. A dense vapor blacked out the stars.

Thus, at 2:30 a.m. December 16, 1811, began the New Madrid earthquakes, some of the most powerful and far reaching quakes ever experienced in North America. Three major earthquakes, several aftershocks almost as powerful, and at least 1,800 notable tremors terrified the region and disturbed sleep as far away as Quebec over the next three months.

The little Mississippi River frontier village lay near the epicenter (the northeast corner of present-day Arkansas) and suffered some of the most severe damage, forcing the entire town to flee for their lives.

The refugees reported that the shock at 8 a.m. was even worse. The ground quivered and writhed. Cracks appeared in the earth, and steamy vapor, blood-temperature water, and mud blew from them. The earth opened and shut. Water spouted higher than the trees.

Later that morning, a chasm 20 feet wide opened in the town. Quicksand and water gurgled up, and a warm mist carried the smell of brimstone.

The tough citizens of Little Prairie began to pack a few light possessions.

At 11 a.m. a huge upheaval beneath the town lifted and heaved it. A dark liquid oozed from the ground, and water spouted 10 feet high. The town began to sink. Trees, houses, and even the mill went down.

Everyone ran in the warm waist-deep water, children on adults’ shoulders. They waded through the water for eight miles before they reached high ground. Swimming beside them were wolves, possums, snakes, and other animals.

If I ever write a sequel to Thunder Beneath My Feet, I’ll find out where they went from there. 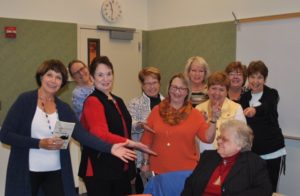 Part of a novelist’s job is promoting, and promotion took more time than usual this fall. After all, the approach of winter was a good time to talk about my last book, Show Me the Sinister Snowman.

Reminder: Still time to buy a copy as a Christmas gift.

Most of my promotion is more subtle than that. For example, in October I took a mental vacation from being an author and prepared a lecture on novels that have had an impact on society for the local Osher Lifelong Learning Institute. Naturally I gave attendees an opportunity to buy copies of all seven of my novels.

The last weekend in October, I split my time between the regional library’s Local Authors’ Day and the innovative ShowMe MasterClass co-sponsored by the Columbia Chapter of the Missouri Writers’ Guide and Mizzou Publishing. My contributions to the latter were mentoring two aspiring novelists and speaking on polishing a manuscript.

In November I used my leftover research on Thunder Beneath My Feet to give a talk about the disastrous New Madrid earthquakes of 1811-1812 at the Senior Center. I’m afraid my descriptions and anecdotes alarmed them about the quakes to come (no one knows when). Several vowed to modify their home insurance to include earthquake coverage.

A week later, I covered some of the same material and answered lots of questions in a long conversation with members of the Bookies, an enthusiastic book club. I never get tired of talking with readers.

Off and on through these and other events, I worked on polishing the manuscript of the first book in a new series. Appearances over and manuscript finished, I’m looking forward to my favorite season, working on my next mystery.

The fiftieth anniversary of Title IX, a landmark law requiring gender equality in schools receiving federal funds, reminded me of how little opportunity to play sports most females of my generation had. (Title IX changed much more than sports, but that’s another story.) In my one-room school with roughly a dozen students in grades one through eight, we had no organized physical education program for girls or boys. We played together at recess and noon, mostly baseball or games involving some form of tag. Our entire sporting equipment consisted of two bats, a softball, a baseball, and a volleyball (used for … END_OF_DOCUMENT_TOKEN_TO_BE_REPLACED

Memories interrupted my enjoyment of the Vienna Philharmonic’s New Year’s concert broadcast last night on PBS. Unlike my Show Me protagonist, a CIA covert operative embedded in Vienna, I lived there only three years, but we shared a love of the city’s music. I went to the opera, an orchestra concert, chamber music, an operetta, or some other musical performance once or twice a week. Tickets were cheap, particularly if you were willing to sit in the balcony directly above a chamber orchestra using the instruments in vogue when the music was composed centuries ago. You could usually get a … END_OF_DOCUMENT_TOKEN_TO_BE_REPLACED

Covid-19 stopped printers cold last spring. Consequently, the mass market paperback edition of Show Me the Sinister Snowman missed its slot in the printing queue. With the snow gone (until next winter, I hope), Harlequin Worldwide Mystery has just released the fifth book in the Show Me series.     This one finds Phoenix and friends trapped in an isolated mansion by a blizzard. Their housemates are aspiring political candidates and potential donors, one of whom intends to lessen their number before the roads clear. Phoenix has come to the meeting with two goals: to support Annalynn’s electoral dreams and … END_OF_DOCUMENT_TOKEN_TO_BE_REPLACED

When I began writing The Feedsack Dress almost 50 years ago, I asked my mother and two sisters to talk about their memories of 1949. I’d chosen that year for the novel because my recollections and my research identified it as a time of transition for the country, our rural Missouri community, and our family. Our discussion evoked many forgotten details and produced a major plot point. We gathered around the kitchen table at my parents’ farm on a hot summer day. To my surprise, each of us remembered not only different movies and music but also different versions of events, … END_OF_DOCUMENT_TOKEN_TO_BE_REPLACED

2020 has been a horrible year. I hope it doesn’t end like another bad year, 1811. That year, rains brought mud and flood to Upper Louisiana. The nightly appearance of the devil-tailed Great Comet prompted rumors of destruction. The brilliant Tecumseh campaigned for tribes on both sides of the Mississippi to unite to beat back the encroaching Americans. The adolescent United States crept closer to the War of 1812. Then a natural disaster struck the middle of the newly expanded United States. In early morning on December 16, a series of earthquakes, aftershocks, and tremors began, interrupting New Madrid’s French … END_OF_DOCUMENT_TOKEN_TO_BE_REPLACED