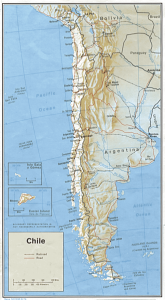 For decades I traveled Peace Corps style: riding buses and trains, staying at B&Bs and austere hotels, and buying most of my food in markets and small restaurants. Traveling on a low budget took extra time, planning, and effort, but it enabled me to experience life in unfamiliar countries somewhat as the natives did.

Gone are the days. I’ve reconciled myself to touring with a group of curious, well-traveled retirees on two-week trips planned and directed by people who make sure hotels and restaurants meet high standards and know where to find a bathroom every two hours.

In November I took such a tour of Chile and Argentina, two countries I’d avoided in my do-it-yourself days because their governments made lots of people disappear. Comfort, congenial companions, and the organizers’ good mix of places and personal encounters made the trip enjoyable and stimulating.

What we saw and heard aroused my journalistic curiosity. I can’t satisfy that, but here are some glimpses of things in Chile that intrigued me.

Although we saw the shacks that trumpet poverty on the way from the airport, most of Santiago looked like a pleasant modern city. Jacaranda bloomed in parks. Well-dressed people (almost all white) rode a clean, quiet subway. Restaurants (seafood is huge) and ice cream places abound. We had some really good ice cream in unfamiliar flavors, and lots of young (and not so young) people were eating cones in the street.

We saw many new high-rise apartment buildings, some near blocks of old mansions that had been turned to other uses—businesses, apartments, schools. Despite a high literacy rate, quality education is more goal than reality, we heard, with the public schools bad and the private ones expensive.

The most surprising, and encouraging, thing to me was the number of protests. For years after the 1973 CIA-assisted coup that ended with leftist president Salvador Allende’s death, protestors tended to vanish. Thousands of others fled the country, with some returning after the repressed but more prosperous citizenry astonished General Augusto Pinochet by voting him out of office in 1988. (The United States gets some credit for helping Chile improve its economy.)

When we went for a walk in the central area, unionized government workers were gathering with signs to push the legislators to put a pay raise in the new budget. Stilt-walkers and drummers added a festive air. We saw small groups of protestors marching in the street several times. Police were plentiful but not obtrusive. They didn’t wear riot gear or carry military arms.

A British tourist told me he saw a different scene from his hotel window early one morning. Police used water cannon against a group of young protestors, targeting one man in particular. A Chilean said he was probably an anarchist making trouble. A defensive excuse? Probably, but anarchists (like looters) do mix with protestors.

Put the protests in Santiago in context. International television news was showing report after report of looters and arson in Ferguson, Missouri. For months the area police had shown they didn’t know how to handle demonstrations. When I lived in D.C., people were brandishing signs whenever I passed the White House.

One reason for the trip was to see Andean scenery. The warm-up was Chile’s low-lying agricultural heartland, where grapevines, fruit trees, and corn often line the highway. The first two provide major exports. I can testify that the fruit was excellent. My companions enjoyed the wines. As to the corn, it forms a major part of the local diet, turning up in casseroles, stews, and salads. 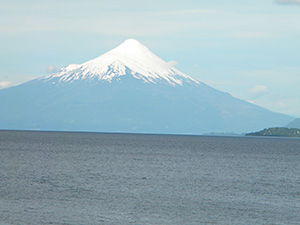 The most scenic area was to the cooler south around the pretty Patagonian resort town of Puerto Varas. Here our hotel looked across the huge Lake Llanquihue to the snow-topped, cone-shaped Osorno and the long, irregular Calbuco volcanoes. A few years ago an eruption spewed masses of sand-colored ash, most of which drifted east into Argentina. A ten-inch layer of ash drove nearby residents away and killed forests, crops, and the tourist trade. People have returned to the towns, and their beautiful gardens attest to the ash’s nutritional properties.

We made several interesting side trips.

• A horse-breeding ranch where huasos, a father and son, showed how they compete in rodeos quite different from ours. No roping, no bull riding, no bucking broncs. Competitors receive points for maneuvering a steer cuddled between their sidestepping Andalusian horses in prescribed patterns without harming it. Dressed in traditional garb that includes a flat-brimmed hat and a heavy, hand-woven poncho in the ranch’s colors, the horsemen eschewed lassos, and their large, round-tipped spurs didn’t harm the horses. A kinder and gentler rodeo tradition. 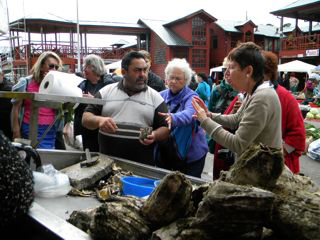 • A Saturday market in Puerto Montt where shoppers found a variety of  fresh seafood, large vegetables, and such other items as cheese. One of our most intriguing finds was a picoroco, a barnacle. The gray, tulip-shaped shell contained a white mass that shoppers took home or ate at the vendor’s stand with lemon juice. I preferred one of Chile’s favorite staples, empanadas. Turnover-sized and shaped, the empanadas held ground meat and potatoes, seafood, or cheese. In the market we saw some Native American faces.

• Petrohue Falls, a national park where green water from a lake rushes through lava formations. The low falls don’t equal the Great Falls of the Potomac near D.C., but the view of snow-capped volcanoes in the distance adds beauty. 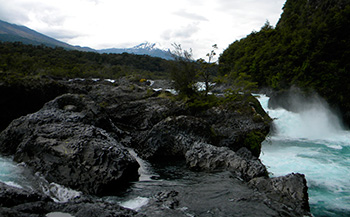 In Puerto Varas, we were near the last-held ground of the Mapuche. The Spanish conquistadors and their descendants (plus some other Europeans) pushed the indigenous peoples who survived attacks and diseases toward the colder, less hospitable south just as we forced native tribes west. Today the Mapuche make up approximately four percent of Chile’s population, and they’re still struggling for their rights.

A Mapuche activist and culture preservationist talked to us about the Mapuche philosophy of life, government persecution for such acts as displaying their flag, and the ongoing fight to regain the land the Pinochet government took from them and awarded to his friends. The preservationist also noted that the Mapuche, by choice, have no written language. His grandparents say the words lose their true meaning on paper.

Our program director told us that eighty-five percent of Chile’s people have mestizo (mixed) blood, and that most of them deny it.

Like most other countries, Chile has a ways to go to build a true democracy. From my limited reading and observation, class constitutes a bigger problem than race, and economic and educational inequality presents one of the country’s greatest challenges. We face the same challenge.

I filtered my observations of Chile through others’ opinions and my experiences in other countries. The friendliness of the people made me root for them. The tour didn’t give me any expert knowledge, but those few days will help me understand what I read in their history and literature and what I see on the news.

Covid-19 stopped printers cold last spring. Consequently, the mass market paperback edition of Show Me the Sinister Snowman missed its slot in the printing queue. With the snow gone (until next winter, I hope), Harlequin Worldwide Mystery has just released the fifth book in the Show Me series.     This one finds Phoenix and friends trapped in an isolated mansion by a blizzard. Their housemates are aspiring political candidates and potential donors, one of whom intends to lessen their number before the roads clear. Phoenix has come to the meeting with two goals: to support Annalynn’s electoral dreams and … END_OF_DOCUMENT_TOKEN_TO_BE_REPLACED

When I began writing The Feedsack Dress almost 50 years ago, I asked my mother and two sisters to talk about their memories of 1949. I’d chosen that year for the novel because my recollections and my research identified it as a time of transition for the country, our rural Missouri community, and our family. Our discussion evoked many forgotten details and produced a major plot point. We gathered around the kitchen table at my parents’ farm on a hot summer day. To my surprise, each of us remembered not only different movies and music but also different versions of events, … END_OF_DOCUMENT_TOKEN_TO_BE_REPLACED

2020 has been a horrible year. I hope it doesn’t end like another bad year, 1811. That year, rains brought mud and flood to Upper Louisiana. The nightly appearance of the devil-tailed Great Comet prompted rumors of destruction. The brilliant Tecumseh campaigned for tribes on both sides of the Mississippi to unite to beat back the encroaching Americans. The adolescent United States crept closer to the War of 1812. Then a natural disaster struck the middle of the newly expanded United States. In early morning on December 16, a series of earthquakes, aftershocks, and tremors began, interrupting New Madrid’s French … END_OF_DOCUMENT_TOKEN_TO_BE_REPLACED

Air conditioning keeps me comfortable during the current heat wave, but I remember how we tried to cool off when nothing but the movie theater was air conditioned. July and August approximated hell when I was a kid. No day was so hot that we wouldn’t work in the fields and the garden. Only the persistent breeze made the heat and humidity bearable. The steamy days heated the house, making it equally miserable. When we got electricity, fans helped a little. During the day the coolest place to be was in the shade of a big elm. (Sadly Dutch elm … END_OF_DOCUMENT_TOKEN_TO_BE_REPLACED

When I started writing The Feedsack Dress, my own memories of farm life and the ninth grade guided the plot, but I needed facts about life in 1949. I looked for them in the same places I would have if I were writing an article. At the library I wore out my eyes scrolling through microfilm copies of the Kirksville Daily Express and two great photo magazines, Life and Look. These answered such questions as the styles of dresses or skirts and blouses a fashionable ninth grader wore to school and how much they cost. Few girls wore jeans or … END_OF_DOCUMENT_TOKEN_TO_BE_REPLACED