On May 7, Harlequin’s Worldwide Mystery will release a paperback edition of Show Me the Ashes, the fourth in my series featuring former CIA operative Phoenix Smith solving murders in rural Missouri. 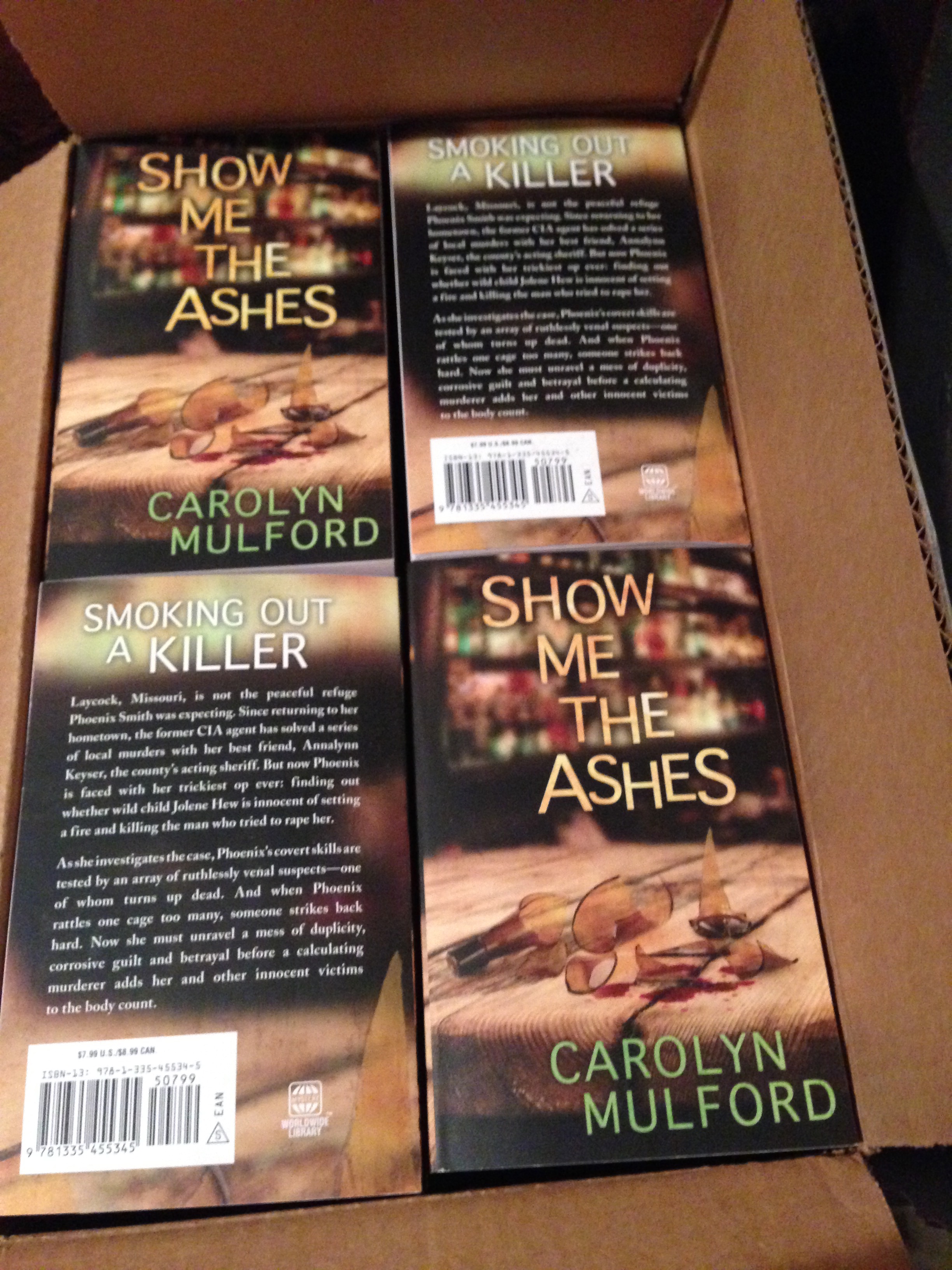 Box of Harlequin Worldwide Mystery edition of Show Me the Ashes

In this one Phoenix and friends, including Achilles, her Belgian Malinois, take on a cold case involving a coerced plea deal (far too common), a string of disturbing burglaries, and crippling bigotr

The WM editors insisted on one editorial change from the original Five Star hardback and e-book editions: “Tramp” replaced “slut.”

U.S. residents may enter to win one of five giveaway copies by leaving a brief comment on what social or legal injustice they find most disturbing. The deadline is May 5, 2019. I will select winners randomly.

The fiftieth anniversary of Title IX, a landmark law requiring gender equality in schools receiving federal funds, reminded me of how little opportunity to play sports most females of my generation had. (Title IX changed much more than sports, but that’s another story.) In my one-room school with roughly a dozen students in grades one through eight, we had no organized physical education program for girls or boys. We played together at recess and noon, mostly baseball or games involving some form of tag. Our entire sporting equipment consisted of two bats, a softball, a baseball, and a volleyball (used for … END_OF_DOCUMENT_TOKEN_TO_BE_REPLACED

Memories interrupted my enjoyment of the Vienna Philharmonic’s New Year’s concert broadcast last night on PBS. Unlike my Show Me protagonist, a CIA covert operative embedded in Vienna, I lived there only three years, but we shared a love of the city’s music. I went to the opera, an orchestra concert, chamber music, an operetta, or some other musical performance once or twice a week. Tickets were cheap, particularly if you were willing to sit in the balcony directly above a chamber orchestra using the instruments in vogue when the music was composed centuries ago. You could usually get a … END_OF_DOCUMENT_TOKEN_TO_BE_REPLACED

Covid-19 stopped printers cold last spring. Consequently, the mass market paperback edition of Show Me the Sinister Snowman missed its slot in the printing queue. With the snow gone (until next winter, I hope), Harlequin Worldwide Mystery has just released the fifth book in the Show Me series.     This one finds Phoenix and friends trapped in an isolated mansion by a blizzard. Their housemates are aspiring political candidates and potential donors, one of whom intends to lessen their number before the roads clear. Phoenix has come to the meeting with two goals: to support Annalynn’s electoral dreams and … END_OF_DOCUMENT_TOKEN_TO_BE_REPLACED

When I began writing The Feedsack Dress almost 50 years ago, I asked my mother and two sisters to talk about their memories of 1949. I’d chosen that year for the novel because my recollections and my research identified it as a time of transition for the country, our rural Missouri community, and our family. Our discussion evoked many forgotten details and produced a major plot point. We gathered around the kitchen table at my parents’ farm on a hot summer day. To my surprise, each of us remembered not only different movies and music but also different versions of events, … END_OF_DOCUMENT_TOKEN_TO_BE_REPLACED

2020 has been a horrible year. I hope it doesn’t end like another bad year, 1811. That year, rains brought mud and flood to Upper Louisiana. The nightly appearance of the devil-tailed Great Comet prompted rumors of destruction. The brilliant Tecumseh campaigned for tribes on both sides of the Mississippi to unite to beat back the encroaching Americans. The adolescent United States crept closer to the War of 1812. Then a natural disaster struck the middle of the newly expanded United States. In early morning on December 16, a series of earthquakes, aftershocks, and tremors began, interrupting New Madrid’s French … END_OF_DOCUMENT_TOKEN_TO_BE_REPLACED